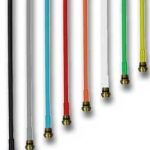 Liners are still available in lengths of up to 25 feet (7.6 m) for various wire sizes. Part numbers will remain the same as released on June 2, 2014.

Please see the chart below for part numbers and wire sizes:

As of August 4, 2014, the manual product line (cable connectors, lugs and splicers) from Bernard has been discontinued.

Bernard has transitioned these products to a new supplier! Customers can contact Hopkin Manufacturing directly to place orders for these products. 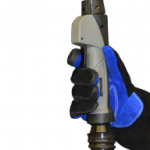 Reduce smoke at the source with an industrial-duty fume extraction gun that is comparable in size and weight to a regular welding gun. 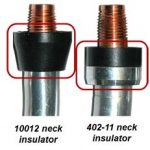 Although no new neck insulators are being introduced due to implementation of the BTB semi-automatic air-cooled MIG gun platform on June 2, 2014, users should be aware that neck insulator replacement for these guns will be based on several variables including:

Please use the following chart when selecting the appropriate replacement neck insulator: 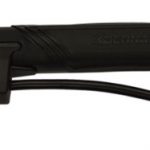 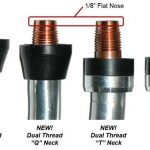 Beginning on June 2, 2014, Bernard’s new BTB MIG gun platform brings our Q-Gun™, S-Gun™ and T-Gun™ semi-automatic air-cooled MIG guns into a single gun line and single configurator.  As a part of this launch, all fixed and rotatable necks offered through the new BTB MIG gun configurator will now feature a dual thread that allows the installation of your choice of consumables – TOUGH LOCK®, Centerfire™ or Quik Tip™ – without the need for special adaptor parts.

How can I tell the difference between single and dual thread necks?

There is a subtle difference to the appearance of the threads on the necks as shown below:

The Bernard necks spec sheet can be downloaded in PDF format by clicking here. 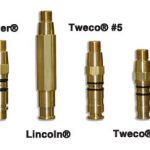 Bernard MIG gun lines that are compatible with these pins include:

Due to the expanded compatibility of these pins, some distributors and end users will be able to reduce inventories of Bernard replacement parts. 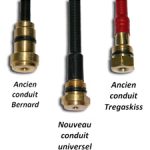 Launched on June 2, 2014, the new Bernard® conventional liners are compatible with all legacy Q-Gun™, S-Gun™ and T-Gun™ MIG guns and all BTB platform guns, which allows you to simplify and reduce your inventory. The image to the right shows how the previous liner locks were merged in the design of  the new Bernard conventional liner to maximize backwards compatibility.

Made of high carbon music wire for smooth wire feed and long life, Bernard conventional liners are available in lengths of up to 25 feet (7.6 m) and are color coded for your convenience to indicate a variety of wire sizes.  Please see the chart below for part numbers, wire sizes, and color coding information:

NOTE: Tregaskiss conventional liner numbers will continue to be offered due to their continued use in Tregaskiss robotic MIG guns. 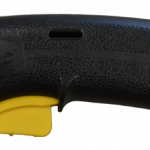 Beginning on June 2, 2014, Bernard’s new Best of the Best Platform brings our Q-Gun™, S-Gun™ and T-Gun™ semi-automatic air-cooled MIG guns into a single gun line and single configurator.  Since we now have six gun handle styles within a single configurator, we have developed the following naming scheme for our handles per the chart below:

Please note that all handle and trigger combinations previously offered continue to be available within the BTB MIG gun platform.

To view a summary of trigger options and other features by handle, please click here. 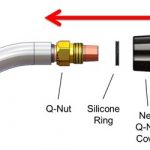 Along with the new Bernard® semi-automatic MIG guns BTB platform launching on June 2, 2014, Bernard is pleased to announce the launch of the improved Q-Nut used on all Bernard rotatable necks. It has been completely redesigned to offer a significant increase in durability. Please note that the new silicone ring, Q-Nut cover and silicone insulator are now installed from the back of the neck instead of the front.

“How to install the new Q-Nut” instructions are available on our website in the How-To Guides and Videos area of our Technical Support section. Please click here to access this How-To article.

All Bernard Semi-Automatic Air-Cooled MIG Guns under the new BTB Platform will have new part numbering as of June 2, 2014.

Former Q-Gun™ and S-Gun™ MIG guns will require an additional character added to the end of the existing part numbers to allow for new liner selection options. Former T-Gun™ semi-automatic air-cooled MIG guns will be adopting Q-Gun style part numbering for consistency across all guns within the new single configurator. Example old and new part numbers are shown below:

For a limited time from June 2 until August 1, 2014, both old and new part numbers will be supported in our system to allow our distribution partners to update their computer systems. 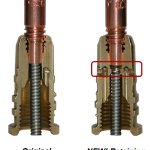 We have added internal stops to all Centerfire™ and Quik Tip™ diffusers to improve alignment between the liner and contact tip for enhanced wire feedability.

This product improvement is being implemented as a running change.

The new internal stop inside Centerfire and Quik Tip diffusers prevents the liner from going all the way through the diffuser, therefore changing how liners need to be installed. Liner installation will now require the removal of the diffuser.

Please note that trim lengths will also be affected.

Please note that it is important to understand which diffuser you are using as this affects liner trim length during replacement. Please refer to the insert inside of your diffuser bag or click here for additional information about liner replacement and trim length details.

The improved swivel design on the Bernard® FILTAIR™ fume extraction MIG gun now uses threads to retain the vacuum hose and eliminates the front band-it clamp from both amperage models. This redesign will improve performance and avoids replacing the hose clamp with a larger head.

The new design threads into the vacuum hose and cannot be removed unless the hose is cut to remove it from the threads. Removing the front band-it clamp also eliminates the possibility of the clamp getting snagged on other equipment, gloves, clothing, etc.

Did any part numbers change?

Answer: The new threaded swivels are backwards compatible with existing guns. As a result, swivel part numbers did not change.

How can you tell the difference between the old version and the new 2013 design?

Answer: New 2013 design will not have the metal front band-it clamp located on the hose near the rear of the handle. See Figure below: 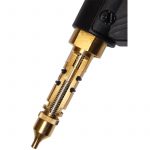 The QUICK LOAD® liner AutoLength™ system from Tregaskiss is designed specifically to minimize downtime, wire feeding and quality issues commonly associated with the liner being cut to an incorrect length.

Short liners are a common root cause of poor wire feeding. Further, a short liner does not have a chance of properly seating in the retaining head — often resulting in “bird-nesting” of the welding wire or premature contact tip failure and wear.

Wire feeding challenges reduce efficiency of the welding process and cause undesirable (and expensive) downtime. A system upgrade to this new innovative product can help improve welding efficiency and reduce costly downtime. 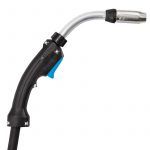 NEW! Ideal for shipbuilding and construction industries to reduce downtime and increase productivity!

Get right to the source and extract fumes at the weld bead with this new gun! 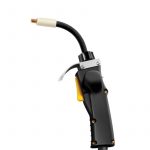 NEW! Built to meet the needs of harsh and demanding environments, Bernard introduces the Dura-Flux™ Gun with replaceable power cable liner that is extremely durable yet comfortable to hold and use. 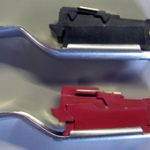 The switch casing design has been updated to allow for improved retention tabs between two switch halves, which also reduces the chance of switches tearing apart during use. This updated lever design is more robust with improved strength.

How can you tell the difference between the old version and the new 2011 design?

Our new 2011 switch is red (shown below in the comparison between current design and new 2011 design). 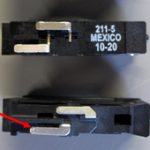 This improved switch design will significantly improve the performance and the life of the switch over previous versions.

The switch casing design has been updated to allow for improved retention tabs between two switch halves, which also reduces the chance of switches tearing apart during use. This new design also provides for an enhanced connection between the exterior terminals and the switch (see Figure 1 below).

How can you tell the difference between the old version and the new 2011 design?

New 2011 design has the large tabs as shown in Figure 2 below.

As of March 13, 2011, the electronic trigger lock (Part Number 411-500) for Bernard® T-Gun™ series MIG guns (formerly Tregaskiss® TOUGH GUN® semi-automatic MIG guns) is no longer available. It has been REPLACED with Part Number 411-4. 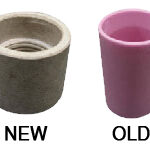 This optional insulator for the 601 series water-cooled nozzle is now made of high-temperature Teflon material rather than ceramic. This new design is shorter than the previous ceramic version, but outperforms the previous design since it uses a more durable material.

This optional nozzle insulator is available as a separate item: Part #601-5-75-4 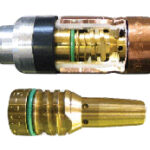 This thread-on nozzle system features a TOUGH LOCK® retaining head with an external thread and a tapered seat.